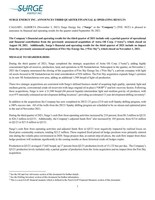 Surge's cash flow from operating activities and adjusted funds flow in Q3/21 were negatively impacted by realized losses on fixed price commodity contracts, totaling $23.2 million. These required fixed priced oil hedge positions were primarily entered into during the volatile price environment in 2020. Surge projects that, at current strip oil prices, the cash flow impact from these hedge positions will moderate significantly in the coming months as the hedges expire.

Surge continues to reduce the impact of its operations on the environment and is pleased to report that it has abandoned over 190 wells in the first nine months of 2021.  The Company spent $3.0 million on abandonment activities during the third quarter of 2021 and has now spent $6.6 million to date during 2021. These activities included the abandonment of inactive well bores and the decommissioning of inactive pipelines throughout its operating areas.

Additionally, Surge has now completed the previously announced 45-kilometer gas gathering infrastructure system in SE Saskatchewan. This pipeline allows the Company to conserve gas at critical facilities and is anticipated to reduce emissions by over 95 percent from its main operating fields in the area.

Surge strives to be a leader in reducing the impact of its operations on the environment and is committed to producing energy in a safe, responsible, and sustainable manner.

This press release contains forward-looking statements. The use of any of the words "anticipate", "continue", "estimate", "expect", "may", "will", "project", "should", "believe" and similar expressions are intended to identify forward-looking statements. These statements involve known and unknown risks, uncertainties and other factors that may cause actual results or events to differ materially from those anticipated in such forward-looking statements.  More particularly, this press release contains statements with respect to management's expectations regarding commodity prices; Surge's declared focus and primary goals; the acquisition of all of the outstanding shares of Fire Sky and the anticipated benefits and timing thereof; management's expectations regarding the reduction of net debt and free cash flow generation; guidance regarding exit 2021 production and exit 2022 net debt; Surge's hedging program; Surge's planned drilling program; Surge's drilling inventory and locations; management's expectations and plans with respect to the development of its assets and the timing thereof; netbacks; production levels; amendments to Surge's credit facilities; and Surge's ongoing ESG initiatives, including abandonment activities and Surge's participation in emissions reduction and gas conservation programs.

Although Surge believes that the expectations and assumptions on which the forward-looking statements are based are reasonable, undue reliance should not be placed on the forward-looking statements because Surge can give no assurance that they will prove to be correct. Since forward-looking statements address future events and conditions, by their very nature they involve inherent risks and uncertainties. Actual results could differ materially from those currently anticipated due to a number of factors and risks. These include, but are not limited to, risks associated with the condition of the global economy, including trade, public health (including the impact of COVID-19) and other geopolitical risks; risks associated with the oil and gas industry in general (e.g., operational risks in development, exploration and production; delays or changes in plans with respect to exploration or development projects or capital expenditures; the uncertainty of reserve estimates; the uncertainty of estimates and projections relating to production, costs and expenses, and health, safety and environmental risks); commodity price and exchange rate fluctuations and constraint in the availability of services, adverse weather or break-up conditions; uncertainties resulting from potential delays or changes in plans with respect to exploration or development projects or capital expenditures; and failure to obtain the continued support of the lenders under Surge's bank line. Certain of these risks are set out in more detail in Surge's AIF dated March 9, 2021 and in Surge's MD&A for the period ended December 31, 2020, both of which have been filed on SEDAR and can be accessed at www.sedar.com.

Surge's internally developed type curves (for Surge, Astra and Fire Sky) were constructed using a representative, factual and balanced analog data set, as of Jan 1, 2021 for Surge type curves, April 15, 2021 for Astra type curves and July 1, 2021 for Fire Sky type curves.  All locations were risked appropriately, and EUR's were measured against OOIP estimates to ensure a reasonable recovery factor was being achieved based on the respective spacing assumption. Other assumptions, such as capital, operating expenses, wellhead offsets, land encumbrances, working interests and NGL yields were all reviewed, updated and accounted for on a well by well basis by Surge's Qualified Reserve Evaluators. All type curves fully comply with Part 5.8 of the Companion Policy 51 – 101CP.

Certain secondary financial measures in this press release – namely, "adjusted funds flow", "adjusted funds flow per share", "all-in payout ratio", "free cash flow", "net debt", "operating netback", "net debt to annualized Q4/22 adjusted fund flow", "net operating expenses" and "adjusted funds flow per boe" are not prescribed by GAAP. These non-GAAP financial measures are included because management uses the information to analyze business performance, cash flow generated from the business, leverage and liquidity, resulting from the Company's principal business activities and it may be useful to investors on the same basis. None of these measures are used to enhance the Company's reported financial performance or position. The non-GAAP measures do not have a standardized meaning prescribed by IFRS and therefore are unlikely to be comparable to similar measures presented by other issuers. They are common in the reports of other companies but may differ by definition and application. All non-GAAP financial measures used in this document are defined below:

The Company adjusts cash flow from operating activities in calculating adjusted funds flow for changes in non-cash working capital, decommissioning expenditures, and cash settled transaction and other costs. Management believes the timing of collection, payment or incurrence of these items involves a high degree of discretion and as such may not be useful for evaluating Surge's cash flows.

Changes in non-cash working capital are a result of the timing of cash flows related to accounts receivable and accounts payable, which management believes reduces comparability between periods. Management views decommissioning expenditures predominately as a discretionary allocation of capital, with flexibility to determine the size and timing of decommissioning programs to achieve greater capital efficiencies and as such, costs may vary between periods. Transaction and other costs represent expenditures associated with acquisitions and employee severance costs, which management believes do not reflect the ongoing cash flows of the business, and as such reduces comparability. Each of these expenditures, due to their nature, are not considered principal business activities and vary between periods, which management believes reduces comparability.

There is no comparable measure in accordance with IFRS for net debt. Net debt is calculated as bank debt, term debt, plus the liability component of the convertible debentures plus or minus working capital, however, excluding the fair value of financial contracts, decommissioning obligations, and lease and other obligations. This metric is used by management to analyze the level of debt in the Company including the impact of working capital, which varies with timing of settlement of these balances.

Operating netback and adjusted funds flow per boe for the three and nine months ended September 30, 2021 are calculated on a per unit basis as follows:

Net operating expenses are determined by deducting processing income primarily generated by processing third party volumes at processing facilities where the Company has an ownership interest. It is common in the industry to earn third party processing revenue on facilities where the entity has a working interest in the infrastructure asset. Under IFRS this source of funds is required to be reported as revenue. However, the Company's principal business is not that of a midstream entity whose activities are dedicated to earning processing and other infrastructure payments. Where the Company has excess capacity at one of its facilities, it will look to process third party volumes as a means to reduce the cost of operating/owning the facility. As such, third party processing revenue is netted against operating costs in the MD&A.

Additional information relating to non-GAAP measures can be found in the Company's most recent management's discussion and analysis MD&A, which may be accessed through the SEDAR website (www.sedar.com).