CALGARY, AB, Nov. 1, 2021 /CNW/ - Surge Energy Inc. ("Surge" or the "Company") (TSX: SGY) is pleased to announce the completion of the previously announced acquisition of Fire Sky Energy Inc. ("Fire Sky") pursuant to an amalgamation (the "Transaction") under the provisions of The Business Corporations Act (Saskatchewan). 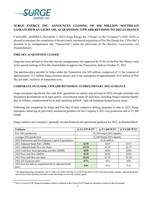 Surge has been advised by Fire Sky that the amalgamation was approved by 97.6% of the Fire Sky Shares voted at the special meeting of Fire Sky shareholders to approve the Transaction, held on October 27, 2021.

The purchase price payable by Surge under the Transaction was $58 million, comprised of: 1) the issuance of approximately 11.2 million Surge common shares; and 2) the assumption of approximately $3.0 million of Fire Sky net debt1, inclusive of transaction costs.

Following the completion by Surge and Fire Sky of their respective drilling programs to date in 2021, Surge anticipates achieving its previously announced guidance for the Company's 2021 exit production rate of 21,500 boepd.

Surge confirms the Company's upwardly revised financial and operational guidance for 2022, as detailed below:

Following the completion of the Transaction, Surge has the following operational indicia and financial attributes:

More particularly, this press release contains statements concerning management's expectations and assumptions concerning the anticipated benefits of the Transaction and the transaction metrics related thereto; Surge's revised guidance for the remainder of 2021 and preliminary guidance for 2022; and management's beliefs and expectations regarding its OOIP, drilling inventory, decline rates; exit 2021 production; and estimated 2022 exit net debt

Unbooked locations are internal estimates based on prospective acreage and assumptions as to the number of wells that can be drilled per section based on industry practice and internal review. Unbooked locations do not have attributed reserves or resources. Unbooked locations have been identified by Surge's internal certified Engineers and Geologists (who are also Qualified Reserve Evaluators) as an estimation of our multi-year drilling activities based on evaluation of applicable geologic, seismic, engineering, production and reserves information. There is no certainty that the Company will drill all unbooked drilling locations and if drilled there is no certainty that such locations will result in additional oil and gas reserves, resources or production. The drilling locations on which the Company actually drills wells will  ultimately depend upon the availability of capital, regulatory approvals, seasonal restrictions, oil and natural gas prices, costs, actual drilling results, additional reservoir information that is obtained and other factors. While certain of the unbooked drilling locations have been de-risked by drilling existing wells in relative close proximity to such unbooked drilling locations, the majority of other unbooked drilling locations are farther away from existing wells where management has less information about the characteristics of the reservoir and therefore there is more uncertainty whether wells will be drilled in such locations and if drilled there is more uncertainty that such wells will result in additional oil and gas reserves, resources or production.

Surge's internally developed type curves (for both Surge and Fire Sky) were constructed using a representative, factual and balanced analog data set, as of Jan 1, 2021 for Surge type curves and July 1, 2021 for Fire Sky type curves. All locations were risked appropriately, and EUR's were measured against OOIP estimates to ensure a reasonable recovery factor was being achieved based on the respective spacing assumption. Other assumptions, such as capital, operating expenses, wellhead offsets, land encumbrances, working interests and NGL yields were all reviewed, updated and accounted for on a well by well basis by Surge's Qualified Reserve Evaluators. All type curves fully comply with Part 5.8 of the Companion Policy 51 – 101CP.

Certain secondary financial measures in this press release – including, "adjusted funds flow", "operating netback", "free cash flow", "all-in payout ratio", and "net debt", are not prescribed by GAAP. These non-GAAP financial measures are included because management uses the information to analyze business performance, cash flow generated from the business, leverage and liquidity, resulting from the Company's principal business activities and it may be useful to investors on the same basis. None of these measures are used to enhance the Company's reported financial performance or position. The non-GAAP measures do not have a standardized meaning prescribed by IFRS and therefore are unlikely to be comparable to similar measures presented by other issuers. They are common in the reports of other companies but may differ by definition and application. All non-GAAP financial measures used in this document are defined below:

The Company adjusts cash flow from operating activities in calculating adjusted funds flow for changes in decommissioning expenditures and transaction costs. Management views decommissioning expenditures predominately as a discretionary allocation of capital, with flexibility to determine the size and timing of decommissioning programs to achieve greater capital efficiencies and as such, costs may vary between periods. Transaction costs represent expenditures associated with acquisitions, which management believes do not reflect the ongoing cash flows of the business, and as such reduces comparability. Each of these expenditures, due to their nature, are not considered principal business activities and vary between periods, which management believes reduces comparability.

Additional information relating to non-IFRS measures can be found in the Company's most recent management's discussion and analysis MD&A, which may be accessed through the SEDAR website (www.sedar.com).