CALGARY, AB, May 13, 2021 /CNW/ - Surge Energy Inc. ("Surge" or the "Company") (TSX: SGY) is pleased to announce it has closed the previously announced bought deal public offering (the "Offering") of flow-through common shares ("Flow-Through Shares"). Surge is also pleased to announce that its first lien credit facilities have been extended through to July 1, 2022. Additionally, the Company is announcing 2021 production exit guidance and preliminary 2022 capital and operating guidance. 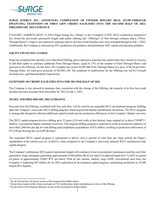 EXTENSION OF CREDIT FACILITIES INTO THE SECOND HALF OF 2022

The Company is also pleased to announce that, concurrent with the closing of the Offering, the maturity of its first lien credit facilities has been extended from December 30, 2021 to July 1, 2022.

Proceeds from the Offering, combined with free cash flow, will be used for an expanded 2H/21 development program, building upon the Company's successful 1H/21 drilling program, which targeted the Sparky and Montney formations. The 2H/21 program is strategically designed to allocate additional capital towards top-tier production efficiencies in the Company's Sparky core area.

The 2H/21 capital program involves drilling up to 23 gross (23.0 net) wells in four distinct, large original oil in place ("OOIP")1, shallow, conventional Sparky sandstone reservoirs. This targeted drilling program is expected to result in production additions of more than 2,400 boe per day for total drilling and completions expenditures of $32 million, resulting in production efficiencies of $13,250 per flowing boe on an IP180 basis1.

The expanded 2H/21 capital program is anticipated to deliver over 6 percent of cash flow per share growth for Surge's shareholders in the current year (ie. in Q4/21), when compared to the Company's previously planned 2H/21 maintenance-only capital program.

The Company's preliminary 2022 capital expenditure budget will continue to focus on production maintenance and free cash flow generation. Surge anticipates generating approximately $160 million ($0.42 per share2) in adjusted funds flow3 in 2022 at current oil prices of approximately US$65 WTI per barrel. With its low decline, shallow, large OOIP, conventional asset base, the Company is budgeting $83 million for its 2022 exploration & development capital program, maintaining production at 16,500 boepd (85% liquids).

On this basis, Surge anticipates generating $62 million ($0.16 per share) of free cash flow4 in 2022, representing a free cash flow yield5 of approximately 28 percent for the year.

Based upon the above, the Company's 2H 2021 and preliminary 2022 guidance is as follows:

The Company will bring on an estimated 3,400 boepd of production from its 32 well 1H/21 drilling program, with results to date meeting or exceeding budgeted expectations. This production was added for "all-in" drilling and completion expenditures of $38 million, delivering production efficiencies of $11,175 per boe.

Over the last six years, Surge has amassed a dominant position in its core Sparky crude oil play, which is proving to be one of the premier, conventional, medium/light oil growth plays in Canada. Surge estimates a weighted average (risked) IRR of greater than 140 percent7 for the Company's entire 425 net well (14 year) Sparky core area drilling inventory at US $60 WTI per barrel flat pricing. These excellent risked returns are for primary drilling only, and do not include waterflood upside.

With crude oil prices now up over 450%8 in the last 13 months, combined with the Company's 85% oil and natural gas liquids weighting, Surge believes it is well-positioned to deliver continued cash flow per share growth and a free cash flow yield in 2022.

Although Surge believes that the expectations and assumptions on which the forward-looking statements are based are reasonable, undue reliance should not be placed on the forward-looking statements because Surge can give no assurance that they will prove to be correct. Since forward-looking statements address future events and conditions, by their very nature they involve inherent risks and uncertainties. Actual results could differ materially from those currently anticipated due to a number of factors and risks. These include, but are not limited to, risks associated with the condition of the global economy, including trade, public health (including the impact of COVID-19) and other geopolitical risks; risks associated with the oil and gas industry in general (e.g., operational risks in development, exploration and production; delays or changes in plans with respect to exploration or development projects or capital expenditures; the uncertainty of reserve estimates; the uncertainty of estimates and projections relating to production, costs and expenses, and health, safety and environmental risks); commodity price and exchange rate fluctuations and constraint in the availability of services, adverse weather or break-up conditions; uncertainties resulting from potential delays or changes in plans with respect to exploration or development projects or capital expenditures; and failure to obtain the continued support of the lenders under Surge's bank line. Certain of these risks are set out in more detail in Surge's AIF dated March 9, 2021 and in Surge's MD&A for the period ended December 31, 2020, both of which have been filed on SEDAR and can be accessed at www.sedar.com.

Certain secondary financial measures in this press release – namely, "adjusted funds flow" and "net operating expenses" are not prescribed by GAAP. These non-GAAP financial measures are included because management uses the information to analyze business performance, cash flow generated from the business, leverage and liquidity, resulting from the Company's principal business activities and it may be useful to investors on the same basis. None of these measures are used to enhance the Company's reported financial performance or position. The non-GAAP measures do not have a standardized meaning prescribed by IFRS and therefore are unlikely to be comparable to similar measures presented by other issuers. They are common in the reports of other companies but may differ by definition and application. All non-GAAP financial measures used in this document are defined below:

The Company adjusts cash flow from operating activities in calculating adjusted funds flow for changes in non-cash working capital, decommissioning expenditures and transaction costs. Management believes the timing of collection, payment or incurrence of these items involves a high degree of discretion and as such may not be useful for evaluating Surge's cash flows.

Changes in non-cash working capital are a result of the timing of cash flows related to accounts receivable and accounts payable, which management believes reduces comparability between periods. Management views decommissioning expenditures predominately as a discretionary allocation of capital, with flexibility to determine the size and timing of decommissioning programs to achieve greater capital efficiencies and as such, costs may vary between periods. Transaction costs represent expenditures associated with acquisitions, which management believes do not reflect the ongoing cash flows of the business, and as such reduces comparability. Each of these expenditures, due to their nature, are not considered principal business activities and vary between periods, which management believes reduces comparability.

Net operating expenses are determined by deducting processing and other revenue primarily generated by processing third party volumes at processing facilities where the Company has an ownership interest. It is common in the industry to earn third party processing revenue on facilities where the entity has a working interest in the infrastructure asset. Under IFRS this source of funds is required to be reported as revenue. However, the Company's principal business is not that of a midstream entity whose activities are dedicated to earning processing and other infrastructure payments. Where the Company has excess capacity at one of its facilities, it will look to process third party volumes as a means to reduce the cost of operating/owning the facility. As such, third party processing revenue is netted against operating costs.