CALGARY, AB, Nov. 17, 2020 /CNW/ - Surge Energy Inc. ("Surge" or the "Company") (TSX: SGY) is pleased to announce that it has executed definitive agreements with the Business Development Bank of Canada ("BDC"), in partnership with the Company's syndicate of lenders (the "Syndicate"), for a non-revolving facility of $40 million, providing attractive interest rates over a four year term (the "Term Facility"). 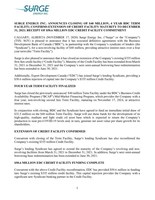 In conjunction with closing, BDC and the Syndicate have agreed to fund an immediate initial draw of $32.5 million on the $40 million Term Facility. Surge will use these funds for the development of its high-quality, medium and light crude oil asset base which is expected to return the Company's production to near pre-COVID-19 levels and, in turn, generate net asset value per share growth for its shareholders.

Surge's lending Syndicate has agreed to extend the maturity of the Company's revolving and non-revolving facilities from March 31, 2021 to December 31, 2021. In addition, Surge's next semi-annual borrowing base redetermination has been extended to June 30, 2021.

Concurrent with the above Credit Facility reconfirmation, EDC has provided $50.6 million in funding into Surge's existing $335 million credit facility. This capital injection provides the Company with a significant new Syndicate banking partner in the Credit Facility.

The above Credit Facility reconfirmation and extension, in combination with the Term Facility, provides Surge with more than $75 million in available liquidity on its credit facilities1.

The Company appreciates the support and partnership of the BDC, EDC, and the entire Syndicate of lenders.

The closing of more than $90 million in new credit commitments provides Surge with significant additional long term liquidity at reasonable interest rates, allowing the Company to pursue attractive development opportunities with a view to generating net asset value per share growth for its shareholders.

Surge anticipates strategically deploying capital into its Sparky play between now and spring breakup, which typically occurs in mid to late March each year. Management currently expects to provide 2021 guidance in January, 2021. Surge's industry leading Sparky play has some of the best production efficiencies2 (<$10,000/boepd IP90), and internal rates of return ("IRR") for drilling new wells in all of Canada. Surge estimates a weighted average, risked IRR, of greater than 50 percent2 for its entire 500 net well (14 year) Sparky drilling inventory at US $40 WTI per barrel flat pricing. These excellent risked returns are for primary drilling only, and do not include waterflood upside.

More particularly, this press release contains statements concerning the anticipated benefits of the Term Facility; EDC credit commitment and credit facility extension; Surge's anticipated production levels; Surge's assets and performance, the characteristics thereof, and the potential for shareholders to benefit from such assets; management's expectations and plans with respect to the development of its assets and the timing thereof; Surge's expectations regarding commodity prices and differentials; management's expectation regarding net asset value growth; Surge's flexibility regarding capital deployment; anticipated internal rates of return; the ability of management to protect stakeholder's capital; and Surge's declared focus and primary goals; and Surge's expectations respecting internal rates of return.

Although Surge believes that the expectations and assumptions on which the forward-looking statements are based are reasonable, undue reliance should not be placed on the forward-looking statements because Surge can give no assurance that they will prove to be correct. Since forward-looking statements address future events and conditions, by their very nature they involve inherent risks and uncertainties. Actual results could differ materially from those currently anticipated due to a number of factors and risks. These include, but are not limited to, risks associated with the condition of the global economy, including trade, public health (including the impact of COVID-19) and other geopolitical risks; risks associated with the oil and gas industry in general (e.g., operational risks in development, exploration and production; delays or changes in plans with respect to exploration or development projects or capital expenditures; the uncertainty of reserve estimates; the uncertainty of estimates and projections relating to production, costs and expenses, and health, safety and environmental risks); commodity price and exchange rate fluctuations and constraint in the availability of services, adverse weather or break-up conditions; uncertainties resulting from potential delays or changes in plans with respect to exploration or development projects or capital expenditures; and failure to obtain the continued support of the lenders under Surge's bank line  as a result of fluctuating commodity prices and reserve determinations by the lenders or otherwise.

Certain of these risks are set out in more detail in Surge's AIF dated March 9, 2020 and in Surge's MD&A for the period ended December 31, 2019, both of which have been filed on SEDAR and can be accessed at www.sedar.com.

This press release contains certain oil and gas metrics and defined terms which do not have standardized meanings or standard methods of calculation and therefore such measures may not be comparable to similar metrics/terms presented by other issuers and may differ by definition and application.

Original Oil in Place ("OOIP") means Discovered Petroleum Initially In Place ("DPIIP"). DPIIP is derived by Surge's internal Qualified Reserve Evaluators ("QRE") and prepared in accordance with National Instrument 51-101 and the Canadian Oil and Gas Evaluations Handbook ("COGEH"). DPIIP, as defined in COGEH, is that quantity of petroleum that is estimated, as of a given date, to be contained in known accumulations prior to production. The recoverable portion of DPIIP includes production, reserves and Resources Other Than Reserves (ROTR). OOIP/DPIIP and potential recovery rate estimates are based on current recovery technologies. There is significant uncertainty as to the ultimate recoverability and commercial viability of any of the resource associated with OOIP/DPIIP, and as such a recovery project cannot be defined for a volume of OOIP/DPIIP at this time. "Internally estimated" means an estimate that is derived by Surge's internal QRE's and prepared in accordance with National Instrument 51-101 - Standards of Disclosure for Oil and Gas Activities.

Surge's internally used type curves were constructed using a representative, factual and balanced analog data set, as of January 1, 2020.  All locations were risked appropriately, and EUR's were measured against OOIP estimates to ensure a reasonable recovery factor was being achieved based on the respective spacing assumption. Other assumptions, such as capital expenditures, operating expenses, wellhead offsets, land encumbrances, working interests and NGL yields were all reviewed, updated and accounted for on a well by well basis by Surge's Qualifies Reserve Evaluators.  All type curves fully comply with Part 5.8 of the Companion Policy 51 – 101CP.

Internal Rate of Return is the discount rate required to achieve a net present value of $0.